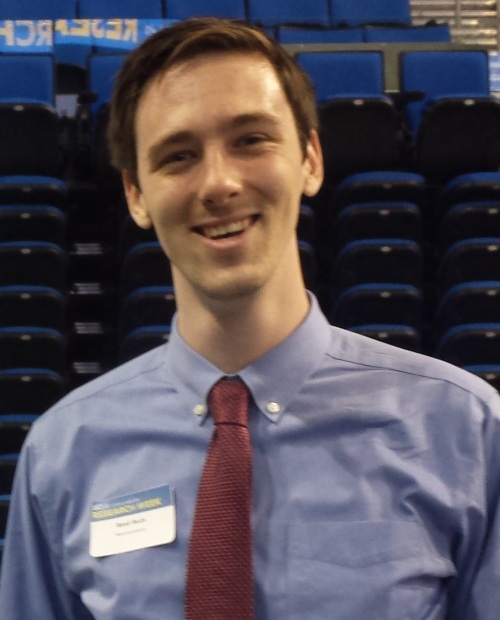 In this weeks’ Showcase Sunday, I would like to introduce you to Reed Buck from Journey into Writing.  I really enjoyed interviewing him because his answers actually made me laugh out loud. Not only did his interview make me laugh, but the way he writes his blog is also witty and unique. I love his writing style because it is different from most the others out there. He learns by doing and he is doing great in my book. Before you run to check him out though, get a taste of his personality in the interview below.

What made you get into blogging?

Well, I’ve been creative writing since I was a kid, and I never really thought much about any other type of writing until after college, when I decided I wanted to give it a shot as a career. That was when my brother suggested to me to try blogging as a way to practice writing skills while I was looking for jobs in communications. Once I’d started, I just kind of fell in love with it.

You mentioned that you fell in love with blogging, what is it that you love most?

I love the honesty of it. I love that, because of anonymity, I can be a little more forward than I would normally be in exposing myself and the way I think to strangers. It’s been really gratifying to see that other people – not just my friends and family – are interested in hearing what I have to say.

Have you ever had any formal training or education in your blog subject?

Er… no. And that’s especially awkward because my blog subject is writing. When I first started my blog, I was working for the UCLA Library doing odd jobs, and as I continued the blog, I was given the opportunity to try some communications writing, some copywriting, and some article writing, but before that the only experience I’d had in writing was my little dinky creative writing projects.

What was your greatest failure and how did you learn from it?

Wow, getting philosophical, huh? I guess in regards to writing, I wrote a book series a while ago that I thought was really good, but I queried something like 80 different publishers and literary agencies and none of them so much as asked for the full manuscript. I also had to actually pay my alpha readers to read it for me. Interestingly enough, paying them was a great idea, because it gave me the courage to ask for the kind of in-depth, honest criticisms of certain aspects of my work that allowed me to hone in on what I was the worst at (which turned out to be pacing and character strength). That gave me a great place to start improving with my current writing project, which has turned out much better.

You also mentioned that you had written a book series before, have you revisited that series to resubmit or have you put it to the side for now? Also, have you written any book since?

I’ve put the series aside for now, although my girlfriend keeps bugging me to finish it. I’m working on a new project now – a single book which I’ve condensed down from what was originally going to be a trilogy – that I’ve written a lot about on my blog. I’ve completed the first third of it – I’m releasing it in parts to my alpha readers – and I expect the second and third parts to follow in the coming 2-3 months.

Who has influenced you the most with your blog?

Oh, wow. I honestly don’t know. I mean, my brother was the one who suggested I get into blogging, so I would probably say him, but since I take my blog to be an extension of my own eccentricity and honesty, I’d have to say anyone who influenced me as a person influenced my blog. Is that a cop-out? It sounds like a cop-out. Oh well.

How much time do you spend blogging in any given week?

Well, I just recently decided to cut back – I was writing a post every day, which was about an hour every day, but I noticed I wasn’t getting as much readership when I did that, so I’ll be posting every weekday from now on and giving myself the weekends to work more on creative writing… and naps. So it’s usually about five hours a week – one hour a day, five days a week. Not too bad.

Is blogging your profession or just a hobby?

Looooool. Yeah, no, nobody would pay me to put this on. I mean, if you ever want to Venmo me a few bucks, I’m not above that. But no, blogging is a hobby for me. Maybe someday I’ll get lucky and my creative writing will make me some money, but for now, all the writing I do is just a hobby for me.

What is your passion?

I have four passions (can you tell I’ve been asked this before?). I love music – especially thematic and game soundtracks that really move me and make great cadence to write to. I love writing (obviously) and reading science fiction and fantasy of all kinds, from children’s and middle-grade all the way up to adult epic fantasy. I love neuroscience – my undergrad major – and learning various little cool things about the ways our brains work. And I love Christopher Nolan movies.

What is your ultimate goal in life?

No pressure or anything. If I were to guess right now, without the benefits of age and wisdom, I would say my  goal in life is to love as many people as possible as often as possible, and to try to express that love and positivity out into the world. And I guess getting one of my books published would be nice, too.

Honestly, I always kind of thought that legacy concept was kind of self-centered. I’d be okay just subsisting and being lost to history, if it just meant I left a few children behind who had good heads on their shoulders (or better than mine, at least). I guess that’s a sort of legacy.

If you had one piece of advice that you could give other writers wanting to get into blogging, what would that be?

Oh, man, I’m not sure I’m the right one to ask about this. My success has consisted of (I think) 25 followers in like 4 months. But I guess I would say have a game plan, and be open. Your gameplan is important because blogs are a huge chunk of the internet – if you don’t have something specific to write about that is unique to you, you’re not gonna get much viewership (like me). Being open is even more important, in my opinion, because people gravitate to someone who’s saying what they feel internally but are too afraid to express. But those are just my two cents, and they don’t go very far in this economy.

Is there anything you want the readers to know about your blog we haven’t covered?

It’s weird, and irreverent. I bounce back and forth between philosophy and writing tips and stream-of-consciousness writing like a pinball. But if you like my tone here, that’s more of what you’ll get at my blog. Thanks for checking it out!

Don’t just take my word for it, please visit his blog and let him know that you saw him here on “Sunday Showcase.”
As always, If you would like your blog to be featured on here, please do not hesitate to email me at craftyartistkc@gmail.com and I would love to feature you next sunday.

I would love to know how this post made you feel! Please tell me below! Cancel reply

I love this little guy. He has a home but if you're interested in one, let me know!! #sloth #vinyl #craftyartistkc #kansascity #missouri #art